Finishing Touches for a Dining 'Temple'

Nine days to go until it's time to roll out the Temple of Hathor at this year's Gatsby Summer Afternoon. The roof facia is painted (some touch-ups needed, but they can go to the end of the project line). Am sewing ties to the back wall now, along with filling a vintage photo album with Egyptian expedition photos from that era. I'm including some bonus shots of the old De Young Museum in Golden Gate Park. Originally built as the Fine Arts Building for the California Midwinter Exposition of 1894, the building was damaged and has since been replaced by a very modern structure.

"The Fine Arts Building was designed in a pseudo–Egyptian Revival style and decoratively adorned with images of Hathor, the cow goddess. Following the exposition, the building was designated as a museum for the people of San Francisco." - History of the De Young.


Dress is cut out and awaiting assembly. No progress on a hat, I'm more concerned about a temple topper than my own chapeau. I have most of the goods to make a Crown of Hathor, and a mock up isn't bad, but I need to make it in a sturdier material that will hold up to wind and last until the temple's next outing.  A friend is already interested in using it for an Amelia Peabody L.A.R.P. (yes, PLEASE.)


Here are a few more pics of the shots I found for the album.


The album itself has a story - I found it on the clearance rack at Salvation Army. It was cleaned out apart from an old clipping and a few photos that I'm guessing were duplicates. From the name printed in the front and the aforementioned, it looks like this belonged to a WWII airman who was from Nevada City, where my husband and I got married. He grew up there, and that's where our families still live. What are the odds?!?!? 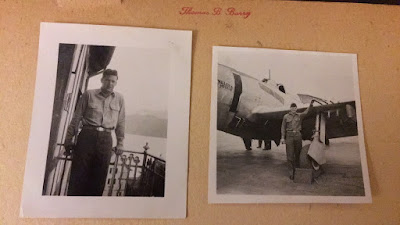