Gateway to the Mania - the GBACG Egyptian Expedition of 2016

I'm starting this blog as an outlet after developing a peculiar condition called "Egyptomania."

Pyramids always held great allure – at 13 I was reading my cosmic mom's library with its spiritualist influences from ancient Egypt. Mummies? Of course. When my brother's kids declared their annual Halloween party theme was "Garden of the Gods," I came as Bastet.

Somehow I didn't realize any of this had a connection to something called Egyptian Revival, until the Greater Bay Area Costumers Guild organized its 2016 "Egyptian Expedition" inviting members to dress up and visit the Rosicrucian museum in San Jose. This fascinating place boasts one of the largest collections of Egyptian artifacts west of the Mississippi. Its architecture and gardens are swoon-worthy and they have managed to recreate King Tutunkamun's tomb to scale.

The cosplay appeal of a faux archeological expedition meets Gilded Age grand tour was too much to resist. The event organizers asked a photographer to take old school silver plate portraits in the beautiful garden. Attendees were invited to wear anything from the age of Napoleon's initial Egyptian campaign to the 1950s (an era for some really fun Egyptian print fabric and skirts you can still find on Ebay and Etsy.) GBAGC members put on a fabulous display of pith helmet meets Cleopatra meets 1915 Grand Tourist attire. (See photo album from the event here.)


The timing was pretty interesting, as I'd just finished an audiobook about the family that owned the house used to film Downton Abby. Lord Carnarvon was an auto fiend until he had an accident, when he decided to turn his attention and finances to amateur archeology. Meaning he hired expat artist and Egyptologist Howard Carter to look for tombs, and paid teams of locals to do the actual digging.

After several seasons of disappointment Carter and Carnarvon made the incredible discovery of King Tutankamun's intact tomb in 1923. A new phase of Egyptomania was born: Tutmania! You can read all about this trend in an eponymous book by Prof. Bob Barker, who traces the origins of Egyptomania back to Napoleon's invasion in the late 18th century. It's worth reading Mirage or one of the other books that describe how that expedition played a major role in popularizing science and exploration at that time.

After figuring out that February 16, 1923, was an epochal moment in the Egyptian Revival - King Tut timeline, I resolved to make this my Gatsby picnic theme. My central costuming theme. It crosses so many eras!

As far as sewing for the GBACG Egyptian Expedition goes, I choose a 1915-ish outfit, which required making a new corset, skirt and shirt. I picked up this pith helmet at a going out of business sale a decade ago because I knew I'd need it someday. I didn't get the corset done until after the event but that came out pretty well too (and it is FINISHED). The skirt pattern is from Wearing History:  http://wearinghistory.clothing/1910s-suit-jacket-skirt-pattern-circa-1916/ and blouse Folkwear Ethnic 104 pattern http://www.folkwear.com/104.html (Note: I still need to make the jacket for this, so i supposed that's a UFO for 2017). 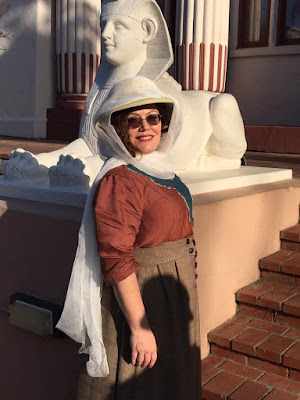 Much of the sewing (and dishes and commuting) was accompanied by the fantastic rendition of the Amelia Peabody novels by audio narrator Barbara Rosenblat. These books are incredibly fun to listen do (by that particular narrator), especially when in the throes of period costuming.


They're written by Elizabeth Peters, a pen name for archeologist Barbara Mertz. Fans of the Parasol Protectorate series will definitely see some similarities in the protagonists. Highly recommended!