The clock is ticking down to Gatsby Summer Afternoon (day after tomorrow). I'm relieved to have finished the button dress from Decades of Style, made from four yards of this OOP reproduction 1930s Egyptian print fabric I found for $20 on Ebay a couple months ago. I had the pattern already but hadn't done all the regrading for my figure. Fortunately a friend had done just that and we are apparently toile sisters, so I was able to go right to cutting the fashion fabric. Hallelujah. 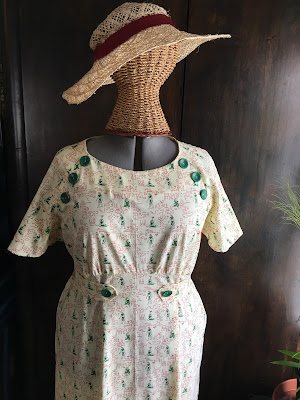 These little buttons were a score; vintage, $10 on Etsy, and I knew they belonged on this dress when I saw the pyramids on the original packaging.

Thanks to the community over on the 1920s-30s Costumers Support Group on Facebook I've learned more about the provenance of this fabric. It's an out-of-print 1930s reproduction in a 100% cotton quilting weight, titled "Aunt Grace Friends Around the World," (c. 2003-4) by designer Judie Rothermel for Marcus Brothers. This seems a bit lighter than a regular quilt weight so has a better drape.

I initially thought this was more of a 1960s look based on the way the pharaohs are designed, but apparently not! I collect vintage Egyptian print fabric but often don't have a lot of information about what I find – I assume anything wider than 39" is post-'50s unless it's a specialty piece more like a sheet (eg, this 7' x 6.25' piece, which came from France and was advertised as 1930s. The size and style of the motifs make me think that is most likely true). Also, I've observed that the narrow width, earlier prints tend to alternate directions of the figures. In other words, the little people are right side up on one line, and upside-down on another line. Am assuming that's so you have more flexibility if using for dressmaking or curtains. Here's an example from the dress I made for last year's Gatsby Summer Afternoon.

I've been collecting the vintage Egyptian prints for a couple years, but finding this wonderful 1922 picture of Agatha Christie in 1922 was thrilling because it's an example of Egyptian Revival dressmaking that is not evening wear You'll see lots of beautiful beaded and embroidered frocks as well as coats decorated in Egyptian motifs on Pinterest, but I haven't seem many casual prints like this from the '20s and '30s. This photo demonstrates to me that this fashion trend extended beyond nightclubs and drawing rooms. Note the larger scale of the scarabs, papyrus flowers and chariots.


This faux 1930s garden party hat is still in process. I didn't order a hood in time to block something, but had this unblocked straw around and love the pattern. If I just "crush" and stitch down the crown it has the right look...but it also looks like a squished-down crown. Maybe if I cover up the side with trim it will pass? Might need to wire and cover the edge, but it's looking pretty good on when I tilt it.

Last but not least, the Egyptian Hotel hanger that is used for all new Egyptian revival projects. Because, the mania. 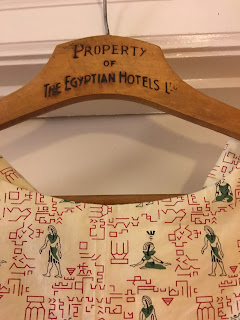